To reoccupy or not to reoccupy, that is the question! 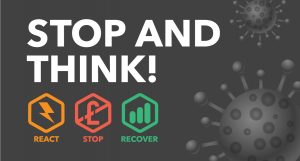 What a shock the reality of getting back to work after lock down is for all. The “intermediate” or phase 2  position (the position between the end of lock down until a vaccine has been produced and is widely used) will be an environment within which it will be difficult to function; and by no means can be considered as normal. Reoccupying buildings, or not is a now question for most businesses.

For the Stop and Think! team, the real question is what makes reoccupation viable? There are four simple questions to ask:

In built-up areas, where public transport is significantly used by staff, the complexities and costs of reoccupation during the “intermediate” phase are likely to test the viability of doing so. Because a building was active prior to Covid-19, does not mean that it should automatically reopen as a matter of course; maintaining a heavy reliance on the homeworking “space segment” may be best  Of course minimising the cost of running any property that is not reopening is a priority.

Stop and Think! Has the thinking, techniques, tools and systems to aid you in preparing for and managing the working environment in the interim phase and beyond.

« We have the answers!
Our forecasting is spot on!! »